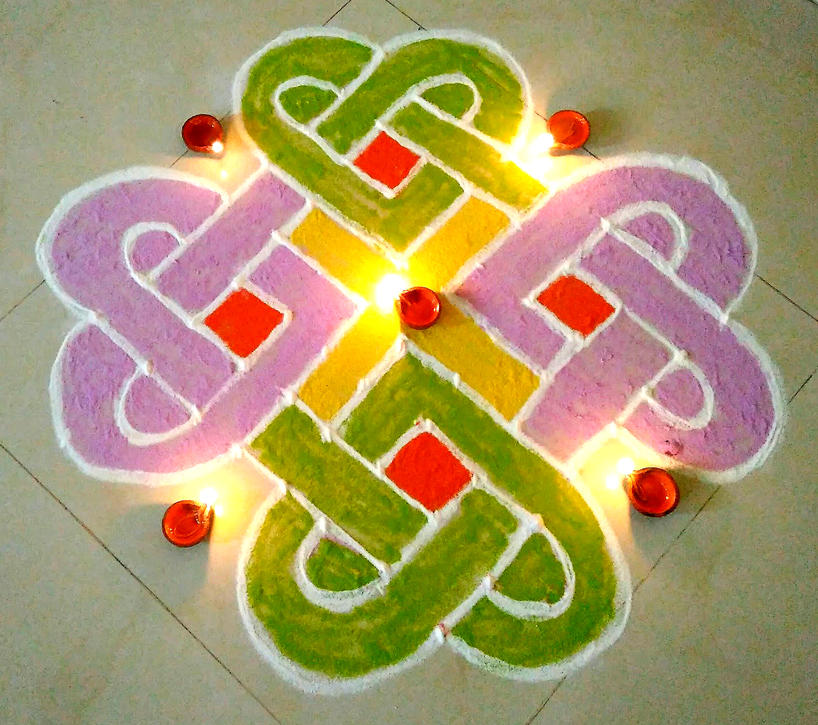 A once in a lifetime trip to India took me on a whole other path; discovering the artform of Kolam. A Kolam is a geometrical line drawing composed of curved loops, drawn around a grid pattern of dots.  In South India, it is widely practised by female family members in front of their homes and Kolams are created daily using powdered chalk, rice or pigments.

Seeing the Kolam artform in India drew together many of my recurrent themes and my interest in geometry combined with ornamentation. Much of my current work is based on the ‘Kolam’ drawing concept. The Kolam is a ritualistic drawing process that is carried out twice a day, usually by the women of the household. They are drawn close to the threshold to invite auspicious gods to enter the house through the design and bring good fortune to the inhabitants. I observed this ritual a number of times while travelling in southern India. It is also referred to as ‘Pongal’. Further research in the UK revealed many interesting aspects of this concept, including digital translations of the methods.

The picture shows the dot-grid layout and the methods of infilling the design. I believe the coloured images to be cooking vessels. They are only drawn from the finger tips, no tools are used. But they are created by fitting into the pro- forma grid system.

The finished image indicates it is for the ‘Pongal’ celebrations. The process has similarities to my experiences of making Felt. The reflective symmetry is common in Indian Felt-making. The colour seemingly does not quite follow the same symmetry rules! The grid of dots and the random forms created remind me of aspects of Paul Klee’s working processes.

Another ‘Pongal’ design: It is interesting that the writing is in English. This more open style uses the white line drawing freely and makes the design a little more ambiguous, more akin to printing. It does have a feeling of the grid geometry of tiling about it.

This Kolam fits all the guidelines in the ‘Dot’ count and intervals method. The lyrical drawing is quite controlled and generated from the centre cross in terms of reflective and rotational symmetry. Odd or Even Numbers affect the outcomes as design symmetries.

Books of Kolam Designs cost 5p and are sold by children in the market place. This is a good example of the figure/ground contrast that can be wrought out of the drawing process. The page demonstrates working with lyrical lines between the ‘dots’ or joining the dots and having a more solid ‘figure-ground’ outcome. Some lines appear to be ornamental additions rather than structural. I use similar strategies in my digital drawings.

This ‘in continuum’ drawing reveals the grid of dots and the use of hoops and lines to create the drawing as a perpetual experience.

This ‘in continuum’ drawing is now in its completed state with night lights added. It is very like the felt designs found in Tonk, a town in central India.

Splash.com produced these Kolam Images found on the web. There is a certain likeness to Celtic Knot drawings and some aspects of Arabic Illuminated manuscripts. In the courtyard of temples similar designs are often painted on the floor on a large scale and are permanent.

My early study using shapes composed of fragments of Tamil alphabet letter-forms. Four principle shapes made up of 1 section of the 4 different groups. One in each quarter. They are located on the grid and surround the White Dot Grid. Each small grid square has a shape or two. The large forms are enclosed like islands. There are Hoops, Arcs and Lines and a distinct ‘Inside’ – ‘Outside’ feeling from the shape relationship to the background. This small pencil study has been much used and developed in many artworks.

This drawing is the same composition but with a deleted or developed grid format. The lines appear more lively and varied. No two squares are alike.
I have adapted this study and made various compositions within the same structure but with different digital outcomes. It was transposed into a ‘vector’ graphic with Adobe Illustrator and became the source of digital products.

This drawing was developed and published as a Laser-Engraved image onto a ready-made cardboard Jig-Saw Puzzle. The Order & Chaos idea is very obvious and is doubly difficult as a colourless jig-saw puzzle.

The disrupted Jig-Saw Puzzle with the guide in the background. There is obvious potential for the parts to become tiles.

‘Tamil -Text-Tile’: The same drawing enlarged and created as a Digitally cut Lino Block. Printed as ‘Blind Embossed’, and once again without colour. The drawing is published as a low-relief image embossed on 300gsm paper and is part of my ‘Material Colour’ series.

‘Kum-Kum-Kolam Temple 1.
The relationship with the grid is emphasised by drawing the grid over the painting. The grid displays the graphic orderliness in contrast to the chaotic colours. All the shapes are from Tamil type forms. The edge designs are gilded with Holographic Foil which responds to the fall of light or the movement of the viewer. The inner portion is Gouache, Watercolour, Gesso, Gold Leaf on Paper.

‘Meenakshee’ The original drawing composition entirely created with 23ct Gold Leaf and Holographic Foil. There are no pigments at all on this image. It was created with a 15C gesso recipe, Armenian Bole, and water-gilded in the same ancient tradition. The forms are all made in low relief. The colours and tones are the effect of the materials. The foil can produce an entire spectrum through to black & white. The beginnings of my ‘Material Colour’ concept for the artworks that follow.

The ‘vector’ drawing allows the image to be transferred to any digital equipment, in this case a laser Cutter & Engraver. The drawing passes through and around the panel. The colour are applied in the same format. The finished painting is perceived as an object with applied colours.

The finished painting. Holographic Foil at the outer edges which constantly change colour. The inner, darker zone is entirely Humbrol Enamel, a model-makers medium, and the centre section is Fluorescent Acrylic. The colours all wrap around the object. It projects 30mm from the wall, the back of the panel is coated in single fluorescent colour that infuses the wall with a gentle coloured light.

‘KUM KUM KOLAM TEMPLE TEMPLATE 2’ The same composition but the outline is printed with Eco-Ink on a digital printer. The paper is heat-mounted on card for stability. The entire surface is gessoed and gilded with Gold Leaf, Gilding Metal and Holographic Foil. All the colours are Flamboyant Enamel and particle Glitter or Spectral colours from the Foil.

The background is covered in the negative shapes of the Tamil alphabet and coloured with black gesso and particle glitter. The entire surface is combed to produce the striated lines. The colour is all Holographic Foil. 22cm X 22cm: Wood panel, Canvas, Gesso, Fluorescent Primer, Glitter & Foil.

Part of the same series as above with the same basic materials and approach. The centre grid of 4 x 4 squares are all holographic foil with a black stencil overlay. The colour changes but the black is constant. The black gesso with glitter background holds the centre together whilst the edges are covered with shapes and a colourful kind of chaos. Some parts are gilded with foil and others painted with acrylic. All the stencils were collected in India.

The ‘dot’ grid has expanded into circles. The Temple plan remains in the centre. The text is an Amercan Type style stencil I bought in New York. The image is entirely Holographic Foil and Carborundum Particles. The circles are striated with combed gesso and the small flat squares are gilded and are the only source of colour. No pigments are used to make the image. A painting on paper.

The theme of the grid, the areas of chaos and the stable geometry continues. The turquoise background is the only applied pigment, a delicate wash over the chaotic gesso relief contained in the square frame. All the colours are spectral or optical, the black is carborundum particles. The lettering/writing is stencilled. The turquoise area is combed and stencilled with traditional henna stencils usually seen on the palms of female hands.